Westerschans 1B is characterised by its wavy balconies and contains spacious apartments on a transparent plinth with retail space. This is the second phase of the urban development integration plan that Jeanne Dekkers Architectuur and ZOETMULDER designed for the entire Westerschans area.

The horizontal elaboration determined by the urban development plan has been further developed into a circular and undulating balustrade. This gives the building a powerful identity within the urban development ensemble. The undulating balconies overlook the water on the east side and catch the sunlight from the south in the protruding point. At the same time, the protruding point on the gallery on the west side provides an additional semi-private outdoor space with evening sun. The wavy shape refers to the omnipresent water and the cantilever all around provides passive sun protection to prevent overheating. Two emergency staircases have also been incorporated into the waves of the gallery. Thus, the expressive balconies become an integral design solution.

Westerschans 1B contains 29 spacious apartments spread over four floors with a varied range of housing. There are six housing types, from standard apartments to luxury penthouses, all characterized by the undulating balconies with a generous view over the water. The corner apartments have an extra balcony or terrace at the end wall, and the top floor has been equipped with a set-back to emphasize the horizontality of the building complexe. There are several retail units on the ground floor that are connected to both the upper shopping area and the lower quay. There is a semi-sunken parking garage underneath the building.

Westerschans 1B is an important urban development link in the Westerschans. The rounded and transparent shapes of the retail plinth connect the upper shopping area with the lower car-free quay. In the centre of the plinth is a spacious passage with a view over the water. The main entrance of the apartment building is located here, as a ramp to the quay. The water can also be reached by the wide, lazy stairs alongside the building. On the quay, space has been created along the facade of Westerschans 1B for integrated planters with seats.

The colours and materials match the materialisation of the rest of the Westerschans, which creates a natural unity in the area. The sand-yellow main materialisation is derived from the sand-yellow IJsselsteen from the old city centre of Goes. This colour is reflected in the sand-yellow fencing and sand-yellow smooth bricks. On the gallery, the bottom metre of masonry is executed in yellow brick and the top one in brown brick. The yellow brick is visually behind the wavy yellow fence, which emphasizes the horizontality of the facade. The brown brick coincides with the shadow cast on the facade by the balconies. This emphasizes the depth effect and enhances the expressive effect of the facade. 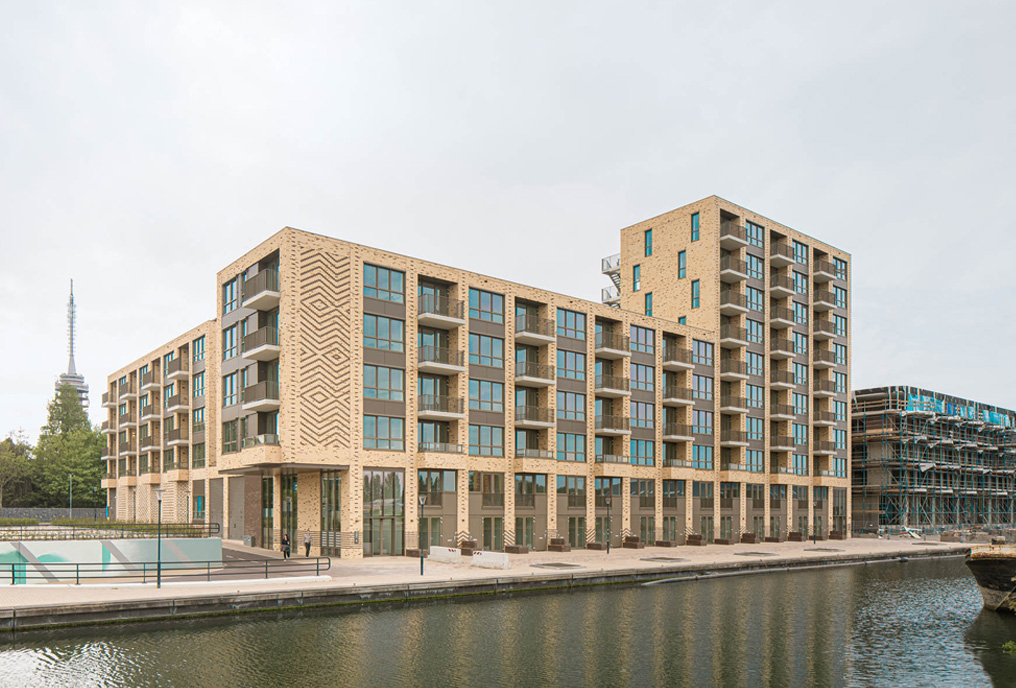